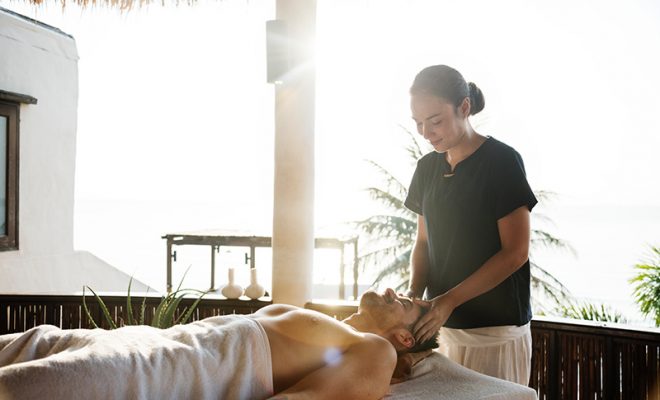 Every good thing has its bad – and mad – side and a full body massage is one such thing. Yes, a full body massage at Massage Envy is an awesome experience but there are awkward moments that will make you, the client, and your therapist cringe in embarrassment.

But there’s no need to sweat the small stuff! Not only are massage therapists experienced enough to deal with these awkward moments but you can also take back control. Here are a few things that will get you started toward a better massage experience.

While small talk may seem like a small matter, it isn’t when you’re on a massage table, in your underwear, and feeling so physically vulnerable. You’re just not up to some small talk because you would rather focus on mind and body relaxation.

But it’s either that you feel the inexplicable need to make small talk or your therapist doesn’t get the hint about your need for complete silence. What then should you do?

We suggest telling your therapist that you want to focus on the experience. You should also avoid getting the ball rolling by starting the small talk. Your therapist, if he or she has enough experience, will take the hint and shut up.

Men aren’t the only ones who experience arousal during a full body massage – women do, too! This isn’t surprising at all because a full body massage will stimulate many of the body’s erogenous zones, such as the neck, waist, and inner thighs, even the feet. In fact, the gliding, rolling and kneading as well as feathering actions on these zones can be more arousing than direct stimulation on the genitals, as crazy as that may sound.

There’s also the fact that the penis has a mind of its own! Such is its disconnection, in a manner of speaking, to the brain that it can become erect at inappropriate times and without its owner’s actual control. Think of the morning wood and the erection while enjoying an otherwise relaxing massage.

Younger men are more prone to erections during a massage but even older men can have them, too.

Don’t blame yourself about it, especially if you’re not having sexy thoughts or malicious intent. You can tell your therapist about your arousal or erection, if it becomes too uncomfortable, in a matter-of-fact way and ask for a break. Your therapist can exit the room while you and your penis relax for a few minutes.

Never ever make salacious or malicious comments toward your therapist! You don’t want to be at the receiving end of a slap or a lawsuit, not to mention that you will get a bad reputation at the massage clinic.

These area normal body functions that serve a purpose – both release excess gas from the stomach and make us feel better afterwards – so we don’t think that there’s anything to be embarrassed about them under the right circumstances.

But, of course, being on a massage table while butt-naked and enjoying a full body massage isn’t exactly the right circumstance! The good news is that it’s completely normal to fart and/or burp during a massage because you’re so relaxed and unguarded.

Just remember, however, that these bodily functions being normal doesn’t give you the license to let them rip, one after the other, during the session. You have to respect your therapist’s right to safe working conditions and that includes low exposure to air pollution coming from your rear end.

And when you do fart, you can apologize to your therapist and leave it at that. Don’t make small talk or jokes about it since it will cut into your relaxed mindset and your therapist’s concentration.

With your therapist’s fingers, knuckles and palms gliding, rolling and kneading over your muscles, you’re likely to become giggly or twitchy. You may also be more ticklish in certain spots so you can help but giggle and twitch each time these areas are massaged.

Your therapist will pick up on your ticklish areas and adjust the pressure or technique used there. For example, instead of feathering and kneading movements with the fingers and hands, your therapist can use long, broad strokes to massage your thighs.

Getting a full body massage is so relaxing that you can fall asleep and wake up refreshed from your nap. But you may also find that you have also snored and/or drooled on the massage table!

Again, you shouldn’t feel too embarrassed about these normal bodily functions. Your therapist will understand that it’s a normal effect of being in a relaxed state.

And if your therapist says that your underwear is in the way, literally, you should consider stripping down to your birthday suit. You will benefit from the greater stimulation on your hips and buttocks, especially on your buttocks. But if you don’t want to be nude, then just tell your therapist about it and your decision will be respected.