Many of our favorite female stars are known to have glamorous nails all the time. We know that Katy Perry, Rihanna, Kim Kardashian, Demi Lovato and even Ariana Grande are posting their favorite nail designs in social media flaunting their perfect nail polish. The “Wrecking Ball” star, Miley Cyrus is also well known for her fabulous nails. Miley Cyrus nails are always hot topic for teens. She wears it with style all the time.

Miley is constantly on the news and grabbing the headlines, a lot of people follow and admire her. Though we’re quite sure there are just as many haters too. But although we usually hear her name in controversies, there are some things you ought to pay attention to, such as her nails.

Below are the most popular Miley Cyrus nail styles:

Disclaimer: Prices shown above have been sourced from individual salon and spa visits and other online sources. They may not cover recent changes. Contact the salon or spa directly to find the exact pricing information.

1. Miley is new to nail polish detox, and she loves it

Our favorite pop diva is known to wear extravagant outfits and costumes during concerts and she has to pair her outfit with a stunning nail design as well. Everything should be properly attached as well to make sure that none of the nail arts will fall during the performance. But with a great nail designer’s advice, she went to a salon and had a nail polish detox.

According to Stephanie Stone, who was once her manicurist, our nails need to breathe a few times a year. So even if you are wearing acrylic or gel polish, it is a must that you give your nail polish a break. It is just the same advice she gave to Miley as the pop star had been wearing acrylics most of the time in her Bangerz tour. Stone also added that frequent visits to nail salons for gel or acrylic application can quickly damage the talons. Eventually, the nails can become brittle and thin. Also, if not properly removed and re-applied, nails could breed bacteria. 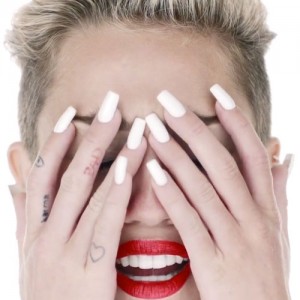 During the detox, she applied moisturizer and oil to a polish-free nails and advised the singer to keep a short length of nails during the rehabilitation process to encourage its growth. After the detoxification, she can come back to the salon to get a new nail art again.

Miley was happy with the procedure and even shared a selfie in her Instagram account showing her newly detoxified nails. 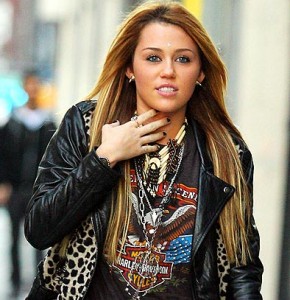 Without uttering a word, the cover girl gives a statement that she does not care what everyone thinks of her. She even acknowledge the fact that she is sometimes called bad. With this image, the world-renowned manicurist Lisa Jachno gave an edgy look on Miley in the cover photo of W Magazine. You should see this cover photo as it says so much about Miley – and her black nail polish would tell you more.

3. She gave Bubba Sue a Pedicure

The pop-singer shocked everyone in social media when she claimed her pet pig, Bubba Sue, had some pampering session too. She actually paints her pet’s nails bright red! However, animal lovers do not like it and showed her their outrage in social media as well. They called it cruelty. But, as we know it, Miley will just shrug her shoulders off. Others might see it a different way as she always shows love to her pets: dogs, cat and even to her fish. A red pedicure to Bubba Sue, for some, only shows that she loves spoiling her.

Our Disney Princess loves Black Diamond nail polish by Azature. A single bottle costs $250,000! It is very pricey because it contains black diamond dust. And since she needs a manicurist to apply this lacquer to her fingernails, she also spends money for the service. Thus, to say that it’s a “very expensive” nail polish is actually an understatement. It costs a fortune to many. She must be very fortunate being able to afford this expensive brand and to enjoy this special treatment.

Miley always makes a statement, even without uttering a word. Her lovely nail polish also says something about her. She got style and she knows what looks good on her. Here are some of the most unforgettable colors and designs she wore by far: